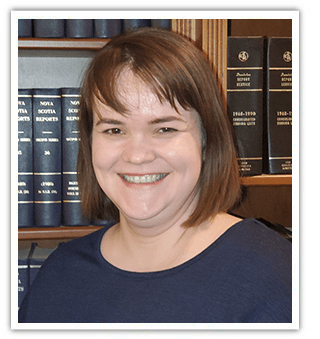 Berli graduated with her Bachelor of Commerce specializing in Law in 2011 followed by a Bachelor of Law in 2016 from the University of South Africa. She worked as Paralegal from 2017 to 2019 before deciding to move to Nova Scotia. Berli joined our team in 2019 as Legal Assistant. Berli loves living near the ocean, spending time with loved ones and is passionate about continuing to learn.

Kim graduated from Saint Francis Xavier University in 1988 obtaining her diploma in secretarial arts. Shortly after her studies, she worked for a lawyer in Antigonish, NS from 1988 till 1992. In 1992, Kim left her hometown and moved to Halifax NS where she again worked for a law firm for two years. From December 1993 until April 1994, she worked for the provincial Crown attorney’s office in Halifax. She then moved to Yarmouth, NS and started working for YACRO (Yarmouth Association for Community Residential) from 1995 to 2008. In 2010, she started her work with us, specializing in litigation, federal prosecutions, corporate and commercial law, family law and succession planning. Kim is devoted to her family, work and all animals, big and small.